With the 2017/18 season less than a month away, fixtures almost complete, rosters (mostly) announced and updated rules in the bag it feels like a good time to catch up with League Manager for NIHLS, Richard Carpenter.

Hi Richard, first things first, most of us know you as the League Manager for NIHLS but what is your full time occupation?

I’m a Senior Member of the University of Oxford, working in the Humanities.

And when you’re not busy running the league, what do you like to do with your spare time?

During the off-season like right now, I’m typing this from next to my tent camped out in East Sussex and enjoy seeing different parts of the country and enjoying the break off from the game. During the season, I typically attend over 50 games of hockey a season, so my weekends are fully booked up from September until the end of April. On a Monday night however, I can be found playing in the Witney and District Cribbage league, myself and Nancy won the Mixed Pairs a few years ago.

Everyone seems to have a favourite NHL team – which is yours?

For reasons that are long forgotten, I support the Columbus Blue Jackets. One of these days, we might even make it to round 2 of the playoffs!

You’re married to the powerhouse behind 482days.com, how long have you and Nancy been together and do you always agree about hockey?

We often agree, but when we disagree we tend to fight our corner. We’re both individuals that are very passionate about the sport but those who sat on the committee when we were running the Oxford City Stars will tell you that we hardly agreed at all! We’ve been together for coming up to 10 years now, married for four. Unsurprisingly, we met through hockey.

Do you play piamg and do you drink your tea out of a piamg mug?!

No, I don’t play it. I don’t drink tea or coffee, so typically for me a 482days.com mug means that I’m not feeling well and drinking a lemsip out of it!

Which is your favourite rink in the UK?

So hard to pick just one. For sheer history and atmosphere, either Kirkcaldy or Whitley Bay. As a modern facility, I love ice Sheffield and it’s design, it’s always such a pleasure to go there. It wasn’t love at first sight but I’ve come to really like the new Streatham rink, although, for me, the original was such a special place. However, if I had to pick a winner overall, one that has the whole package, I think it’s hard to look past Ice Arena Wales in Cardiff Bay. Brilliant exterior, two great pads, outstanding sight lines in the main arena, it’s superb to have it in both NIHL1 and NIHL2. 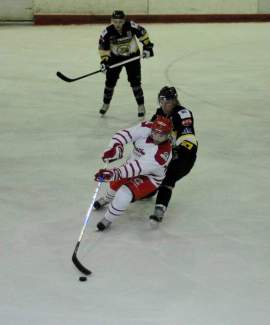 Action at the old Streatham Rink (courtesy of Rick Webb)

What is the funniest thing you’ve ever seen at a game?

Plenty that I can’t say! But one that always makes me smile is at Coventry back in the 2000/01 season. Hilton Ruggles, ex-Whitley, Manchester, Cardiff and Newcastle forward, signed for Coventry in the first season after the move from Solihull and was very much a character. He took a 2+10 and went to the box for his penalty. After getting in the box, he had a quick read of the Coventry Evening Telegraph and then after a few minutes, a fan turns up and passes a packet of chips from the café through. Suffice it to say, sat in the block right behind this, it was hilarious. He was also the best ever player to be refused a contract for the Murrayfield Racers, but that’s another story.

So tell us about your first ever experience of ice hockey?

My parents took me to watch Sheffield Steelers vs Durham Wasps in the old Heineken Premier League back in the 93/94 season, and I loved it from the first moment I watched it. Because my mum and dad knew people that worked/volunteered for the club, I had the full tour as well which was great!

Have you ever played hockey and if so, who for and what position did you play?

I’ve never played. I was learning to skate once and broke my ankle on both sides. And so, can’t play, can’t skate. Can’t coach either.

How long have you been League Manager and in a nutshell what does this entail?

Each of us League Managers does two things, we are responsible for the day-to-day running of the league, answering queries from clubs, approving matters under the rules where required. We do not do fixtures or registrations, nor do we suspend players. A typical week for me is about handling any club correspondence. On a gameday, we stay available to help resolve any issues that may occur across the country

Each League Manager also has a specialism and mine is rule-writing/NIHL Governance, hence why I write the Rules of Competition and bore people about them on twitter.

What’s the best thing and the worst about being League Manager?

Personally, I do this role to try and make a difference for ice hockey in the UK, hence why I volunteer my time for it. I honestly believe that the governance we’ve built over the past few years is starting to pay off in the game and that’s the most pleasing thing about it.

The worst thing simply is having to clamp down, when we have to do this. An example is what happened at the start of last season in NIHL1 South, when the league was nearly out of control with huge numbers of brawls in the first month of the season. The EIHA and myself prefer a more passive approach to league management, but if we have to get more involved, then we will. It’s still not something that anyone particularly enjoys though.

What do you love about hockey in the UK.

For me, the best thing about it is seeing the away support, people travelling from their own rinks, making lots of noise and supporting their team. I’d really encourage people that are just home game only fans to give it a try, travelling away from home, you’ll find it’s a totally different experience, and probably a better one from an atmosphere point of view.

If you could wave a magic wand and change three things in hockey at NIHL level what would they be?

There’s no doubt that this has been an eventful summer already. I certainly didn’t expect that we’d be in this position, with the EPIHL folded and the NIHL now the remaining EIHA Senior League. However, it’s a great opportunity to build something new as well. In terms of change, I think we’ve had enough of that already thanks!

Out of all the games you’ve watched over the years which NIHL game has been the most memorable and why?

As a fan: Feb 2010, Chelmsford Chieftains 2 – 3 Oxford City Stars. Stars go three up, Chiefs hit back to 3-2 then hit the crossbar, bounces on the line and out. Referee awards no goal, Oxford fans go crazy and seal the victory. Hockey at it’s passionate and controversial best.

As club secretary: April 2013, Oxford City Stars 4 – 3 Slough Jets. Stars trail three times but Joe Oliver scores the winner to win the league for the Stars. First time Oxford had been sold out in years and years, great to see.

Since becoming League Manager: April 2016, Streatham 4 – 4 Chelmsford Chieftains. Streatham, it’s fair to say annihilated in the Cup Final a few weeks before, edged past Oxford in 1st round playoffs, but produced a stunning performance. Redskins edged ahead but Chelmsford leveled it up late at 4. Outstanding game of hockey.

What would your stand out moment of last season be in NIHLS1? And NIHLS2?

Probably the playoff finals, 2nd legs for both. Both had a Chelmsford team, well behind after the first leg, making an incredible start to the game and everyone thinking, “surely, they can’t actually do this”. It ended up with two superb finals and I really enjoyed them both.

Of the players that you know who would you say are the most talented young players in the new NIHL currently?

I think that at the moment, it’s difficult to start answering questions on this because of all of the changes that have taken place already with this season. I think it’s fair to say, it’s going to take some time for this league to settle down and then we’ll be in a better question to think about such things.

What are you looking forward to most next season?

Without a doubt the playoffs. Sixteen team, joined up playoffs is a dream come true, it really is and I personally can’t wait for it.

And finally, I have to ask, who’s going to win the league?

As you didn’t define the league, I’ll pluck for the mighty Columbus Blue Jackets to lift the Stanley Cup.

Very sneaky of Mr Carpenter there to elegantly side-step the final question but there you have it, a brief insight into the man behind the scenes managing NIHLS. Thanks to Richard for taking time out to answer some questions whilst enjoying the great outdoors in what little we have left of summer. Don’t forget to give him a wave when you spot him next season if he happens to be at your rink.