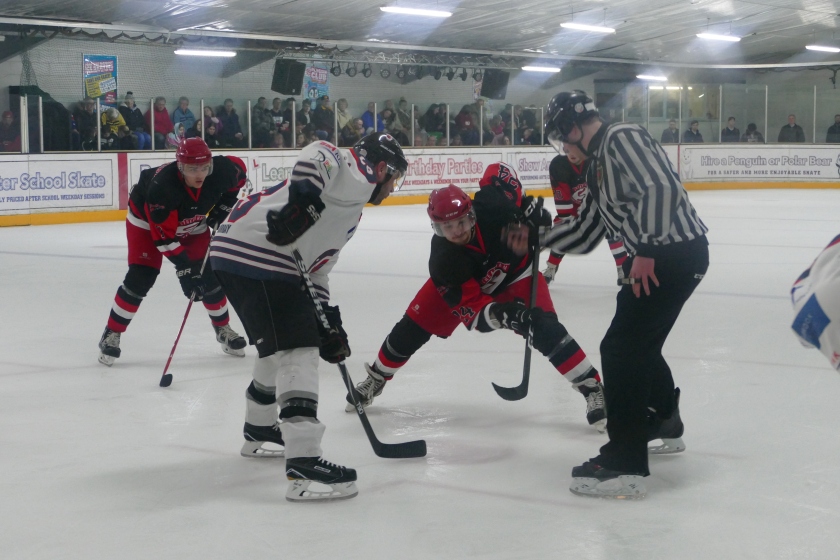 The fate of Chelmsford, Oxford and Solent hangs in the balance but it is expected they will be included into NIHLS2.

So, one of the most significant things here was who stuck their head above the parapet, took a chance and withdrew.

Chelmsford, Oxford and Solent placed 1st, 4th and 6th respectively last season now look likely to be given respite in NIHLS2 with the potential I guess that a knock on NIHLS3 will form. However, any club that remained in NIHLS1 and for whom next season results in last place will not be allowed to drop down.

How one year a team can easily win a league and demote itself but the next year a club can come bottom and be denied that same right is baffling so when the news comes about NIHLS2 let’s hope it all makes perfect sense.

If as expected Chelmsford, Solent and Oxford arrive in NIHLS2 then jumping early will have been rewarded with understanding. For those remaining in NIHLS1 battling on, helping to sustain the new format could result in one of two things for the bottom placed club. Struggle on for another year or fold. How does this make for a workable model?

It has been made clear that the door to NIHLS2 will be firmly locked. It is not however clear what the plan is if one of the four ex PIHL teams were to decide to give Elite hockey a go. Add to that the possibility of one or more lower placed clubs folding this would put the league back where it started – with seven teams, which we are told is unsustainable.

Interestingly a statement issued by London Raiders reveals they are buoyed up and ready for the challenge and were seemingly building towards the PIHL in any case. With a shiny new rink on the horizon and a new coaching structure in place this is a club with high ambitions and a positive outlook on the current situation. So why weren’t they supported in joining the PIHL? Was it simply a step change too far for them at that stage? Perhaps the PIHL could have continued as it was with London Raiders waiting in the wings to be included upon their return to Romford.

Will we see the collapse of NIHLS1 only to find the PIHL resurrected next season with the original 7? Much will depend on how the season plays out in the south and also in the north.

The 2017/18 season may have been better served by a 7 team PIHL with a crossover cup. I’m still not clear why Ken Taggart deemed it unsustainable. Is there clarity and transparency about the reasoning behind this entire restructure for all the clubs affected?

Clubs may have been unhappy with the cross-over cup in the past but if it were a choice between a regular NIHL with separate PIHL and compulsory crossover cup or an integrated NIHL/PIHL I wonder which option clubs would have chosen.

It’s interesting to consider that if the original 7 PIHL clubs had stayed together there would have been 24 competitive games for each club (based on two home and two away) which could have been added to with a cup competition.

As it stands the 4 ex PIHL clubs in the south will now get just 12 competitive games each (when they play each other) with the expectation they will then thrash the NIHLS1 teams in the other 20 games. This hardly seems like an appealing and sustainable standard for anyone.

NIHLS1 teams on the other hand will have 16 competitive games and 16 games where they may suffer significant losses. Which teams are likely to retain their support in those circumstances? Those doing the winning or those on the losing side?

Before I forget, hoorah for the playoffs. 8 of the 9 teams will go through to the playoffs with the 9th team being offered momentary respite from a miserable season before remembering that they aren’t going to be allowed down to NIHL2 anyway. If 1st place plays 8th and 2nd plays 7th etc then how can that ever be a joyous proposition for the NIHLS1 teams when they are more likely to be those placed 5th to 8th?

Fingers crossed there will also be an announcement as to the naming of the new league. Surely those who were to be honoured with their names heading up the conferences won’t be forgotten in the melee.

The knock on effect to NIHLS2 cannot be ignored. With nowhere to go you have to feel for those clubs who have limited resources with players signing pay to play contracts who will suddenly find themselves up against the likes of Chelmsford and Oxford – unless of course NIHLS3 is created.

So the timescale for restructure did not adequately take into account the enormity of the change and it’s impact on the teams at various levels. Conversations should have been happening one-on-one well before the end of the season. The proposals should have been provided prior to the meeting and clubs should have been able to have honest and private dialogue about what would and wouldn’t work,

This post can’t even begin to consider the implications for coaches, players and fans, the financial aspects of this new structure on clubs or indeed what ‘the NIHL1 standard’ mentioned in the EIHA statement actually means. This blog post barely scratches the surface and others will no doubt be better placed to write meaningful and perhaps more upbeat comment.

As an eternal optimist I would love this post to be about how bright the future looks for ice hockey across the various tiers, however it’s hard not to see the downsides at this point. Having said all this, I honestly hope it all comes together and works.

In simplistic terms as posted in a previous blog (EPL vs NIHL or Fruitcake vs Chocolate Fudge Cake) you can’t make a chocolate cake out of fruitcake ingredients. The frocolate cake is upon us folks, step right up and take the taste test.